East Cambridgeshire District Council has been exploring the options for effectively managing its moorings on the River Great Ouse in Ely and as a result, a new mooring management scheme was launched on 7 September 2015. The Frequently Asked Questions below set out how the scheme will work:

Why does the Council need to manage its moorings?

East Cambridgeshire District Council owns land and moorings along the River Great Ouse in Ely. These visitor moorings have been very popular for many of years and a recent survey carried out by the Council suggests there are boaters who are unable to visit Ely as the moorings are frequently full – particularly during the boating season. The Council would like to encourage more boaters to visit Ely and ensure that moorings are available when boaters arrive. The consultation results suggested that visitor moorings which were free of charge for forty eight hours, and specified a ‘no-return’ period for forty eight hours would be the most appropriate duration. This balances the need for a regular turnover of boaters, while allowing an adequate length of stay for boaters to enjoy the facilities and visitor attractions Ely has to offer.

How is the Council going to manage its moorings?

Some boaters may remember the Council used to enforce its forty eight hours (no return for forty eight hours) visitor moorings through a Mooring Bye-law. Regrettably the Council was unable to continue with this approach and after a great deal of consultation and exploration of other potential mooring management solutions, the District Council concluded that the most effective method of managing the moorings would be to enforce them using contract law.

The terms of the contract to moor will be set out on signs along the length of the Council’s moorings. Any boater choosing to moor, anchor or remain stationary at the moorings in effect agrees to the contractual terms set out on the sign. If any of the terms are breached, a charge of £100 is payable (a further £100 charge is payable for every twenty four hour period that the charge is breached). This is reduced to £70 if the charge is paid within fourteen days of the Mooring Charge Notice being issued. If the mooring charge is not paid within twenty eight days, the Council will commence debt recovery action (including court action) which will incur further costs.

We are sure the vast majority of boaters will continue to moor responsibly considering the needs of other river users, and the new scheme will encourage boaters to plan their stay along the river network in advance.

What are the contractual terms that I am agreeing to if I moor my vessel at the Councils moorings?

The contractual terms will be set out on signage along the length of the Council’s moorings between Annesdale and Willow Walk, Ely.

You are also accepting that camera equipment is in use on this site to record activity and that in the event of a chargeable incident being recorded the Council may request the registered owner’s details from the relevant Navigation Authority.

What part of the River Great Ouse does the Council’s Mooring Management scheme cover?

The Council’s moorings start at Annesdale and finish at Willow Walk, Ely. A map can be found on the back of this flyer illustrating the precise location of the District Council’s moorings. Signage will be set out along the length of the Councils moorings which in addition to setting out the contractual terms you are agreeing to, also indicate where you are, should you need to call the emergency services for assistance. You will note from the map that visitor mooring is not permitted in the area allocated to commercial mooring and the mooring immediately outside the Environment Agency’s pump out is limited to a maximum of one hour in duration to ensure the facility can be used effectively.

How will the mooring contract between the Council and the person/s in control of the vessel be enforced?

The Council has recruited two Riverside Officers who will be responsible for recording the details of all vessels moored at the Council’s moorings. A Riverside Officer will visit the moorings every day and if their records show that one of the mooring conditions has been breached then a Mooring Charge Notice (MCN) will be issued. They may hand this to the master of the vessel if they are available or they may secure the MCN to a window. The Riverside Officer will also take photographs showing the MCN attached to the vessel (if the MCN was not handed to the master of the vessel) and its proximity to the closest sign setting out the contractual terms. The Mooring Charge Notice will set out what contractual term was breached and how to pay the charge due. The MCN also sets out how the charge can be appealed. If the MCN is not paid within twenty eight days the Council will commence debt recovery action that will incur further costs.

How can I pay to moor?

How do I appeal a Mooring Charge Notice?

When did the new mooring management scheme start?

The Scheme was launched on Monday 7 September 2015.

Are boats allowed to double moor on the Council's moorings?

East Cambridgeshire District Council supports the Environment Agency's position to allow double mooring to relieve pressure on the limited moorings available in Ely, provided it does not impede navigation. The Mooring Management Scheme contractual terms apply to any boater choosing to moor, anchor or remain stationary at the moorings for example it applies to double moored boats.

What else should I consider if I am going to use the Council’s Moorings?

The map below illustrates the extent of the councils moorings, to which the mooring management scheme applies: 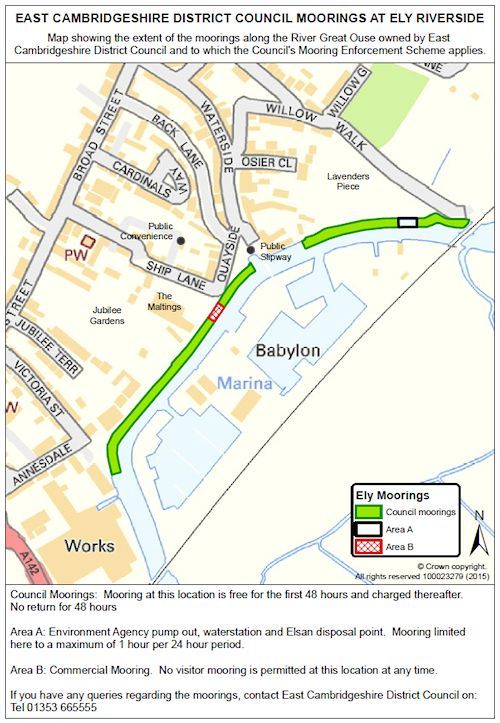