Both applications were considered by the Council's Planning Committee at its meetings in March, June and November 2014. The proposals were considered to be acceptable in principle and given delegated approval. This enabled officers to work with the developers and Cambridgeshire County Council on drafting the S106 agreements. This work has now been completed.

The ECDC response to the revised application dated July 2013 can be found below. Planning Permission was granted in June 2015.

In September 2017 Redrow Homes submitted a Reserved Matters application for Access, Appearance, Landscaping, Layout and Scale for 200 dwellings. The application reference is 17/01722/RMM.

In August 2013, a second planning application was received from Endurance Estates for land between Lynn Road and the A10.

The application is for 1,200 homes plus a range of business and community uses. The planning application reference is 13/00785/ESO. Planning permission was granted in June 2015.

Hopkins Homes submitted a Reserved Matters application for phase 1 of the Endurance Estates site which was approved September 2017. This will deliver 199 homes plus garages, roads, footpaths/cycleways and open spaces. For more details please see the application on the Planning Portal. The planning reference is 16/01794/RMM.

Taylor Wimpey submitted a Reserved Matters application for phase 3 of the Endurance Estates site which was approved August 2020. This will deliver 258 dwellings and associated infrastructure. For more details please see the application on the Planning Portal. The planning reference is 20/00360/RMM.

More information can be found on the Endurance Estates Website.

Both applications can be viewed via the Council's online planning system. 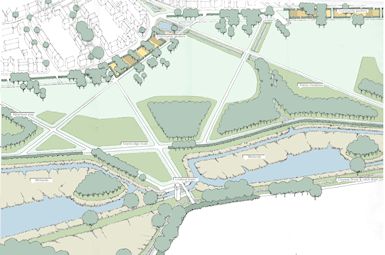 The new North Ely development of 3,000 homes will bring with it many benefits including an extensive new Country Park, using land between the new houses and the railway line to the north of Ely. This will be a key feature of the development and is expected to incorporate a great variety of recreational spaces mixed with areas of rich biodiversity. The Park will also include a network of attractive ditches, swales, reed beds and ponds as part of the sustainable urban drainage system.

In order to develop a vision and design concept for the new park, East Cambs District Council have appointed Landscape Consultants Sheils Flynn to undertake a study and to develop a plan for the Park that compliments the existing facilities in Ely, incorporates the views of local people and meets the needs of all Ely residents. The study is being done in two stages and Sheils Flynn have now produced their first concept design and this was approved by the Council’s Commercial Services Committee on 8 July as a consultation draft. A copy of the Stage 1 report can be found below.

Stage two of the Study involved a series of consultation events and a three-week consultation period ran from Thursday 6 November - Friday 28 November 2014. This enabled local people and other stakeholders to have an input into the development of the design and layout of the new park. The exhibition panels setting out the initial design proposals are available to view below.

Year 8 Geography students from Ely College also got the chance to influence the design of the new North Ely Park. Following a brief presentation from Sheils Flynn, detailing the site and issues such as drainage and sustainability that they would need to consider, the students were tasked to design their vision for how the new park should look and what it should contain. A small number of the plans were then presented to the consultants, Councillors and Officers from ECDC and the City of Ely Council, and will form part of the consultation feedback.

Sheils Flynn considered all the feedback received and incorporated it into the Stage 2 report which has been approved as the Council’s vision for North Ely Park. The Stage 2 report can be found below.

Ely is a focus for growth within East Cambridgeshire and the concept of a growth area to the north of Ely was first introduced in the Ely Masterplan, which was adopted by East Cambridgeshire District Council (ECDC) in 2010. The Masterplan vision requires the development of 3,000 homes in North Ely by 2031 with a view to providing an increased population to support a comprehensive range of infrastructure and facilities, to enhance the levels of employment self sufficiency in Ely and to enable the City to develop sustainably. Proposals and policy for North Ely have since been developed further, as outlined below.

The proposed site of development is currently in agricultural use and covers some 200 hectares. It is bound to the north-east by the railway line, to the south by the existing built-up area of Ely, to the west by the A10 and to the north-west by the small hamlet of Chettisham.

The overall site is divided into two main parcels of land with the Lynn Road corridor running north-south between the two. The Council is anticipating that the development may involve up to four separate planning applications.

The Ely Masterplan was adopted by the District Council in 2010. This sets out a strategy for the development of Ely based on long-term growth, supported by significant infrastructure improvements.

The North Ely Development Framework was adopted by the District Council in September 2011. The document can be found below.

It was prepared to establish the guiding principles for the development of North Ely in order to:

The East Cambridgeshire Local Plan was adopted in April 2015.

In addition to the Ely Town Vision, which sets out specific policies for Ely, the Local Plan also outlines some key guiding principles for new development across the district. It also ensures that the development of North Ely is integrated into the physical and social fabric of the wider City of Ely and takes account of other planned improvements.

The North Ely Supplementary Planning Document (SPD) sets out guidelines for the development of an urban extension to the North of Ely, which will enable the city to develop and grow. A copy of the document can be found below.

The SPD is a statutory planning document which explains the steps that are expected in the planning, design, build out and management of the area.  It will be used as a guide to assess and determine each planning application.

The plan for North Ely includes:

A six-week consultation period ran from 28 October 2013 – 6 December 2013 and the public were invited to give their views on the SPD document. As part of the consultation process, public exhibitions were held at Ely Beet Club, Lynn Road, Ely. These exhibitions provided an opportunity to view and comment on the proposals in the draft SPD.

Other Documents of Interest

The two developers for North Ely have worked in partnership to produce a North Ely Joint Strategic Masterplan. Whilst this document has no policy status, much of the content has been used to inform the Draft North Ely SPD. It is therefore of interest as background information. The document can be found below.